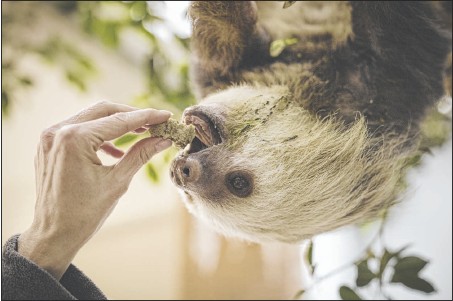 Meet the very chill two-toed sloths at Cheyenne Mountain Zoo It’s wakey wakey time, and Bosco is starting to consider thinking about slinking down for breakfast from his perch in a ficus tree at Cheyenne Mountain Zoo. On a good day, the 14-pound, 29-year-old Hoffman’s two-toed sloth’s morning routine takes about 10 minutes, but today the big guy has decided the yams, carrots and bell pepper slices aren’t worth the effort. Instead, he stays hidden up high in the branches, slowly scratches his rear end and other itchy parts with his long nails, and curls back up for a snooze. Meanwhile, try keeping his exhibit mate, the 18-pound, 21-year-old Chalupa, from her morning meal. Using her long, curled nails, the sweetfaced lady maneuvers down from her roost in the warm, humid Scutes Family Gallery. As she hangs upside down by her toes, revealing her coarsely haired belly, keepers tear off chunks of primate food — blocks of mashed-up grains and oats the sloths love even though they’re not primates — and place them near her flat nose. One whiff, and her mouth opens wide so the food can be plopped on her tongue. “Chalupa is our foodie. This is what they live for,” said Scutes Family Gallery lead keeper Bailey Jones. “They come down and love to hang out with us. After they eat, they usually go back to sleep and that’s their day.” But clearly, sloths do a little more than just sleep and eat, as Bean was born to Bosco and Chalupa in 2019. When the now 2-year-old got big enough to begin exploring, keepers moved it to The Loft, in another part of the zoo. “They’re a pretty solitary species,” Jones said. “Chalupa was like OK, that’s good with me, let’s go our separate ways. That’s just their nature.” Little characters in a fur suit. Chalupa is an enthusiastic grunter who also likes to wear her food. She gets so excited about incoming morsels that she starts to drool, which gets all over everything. Her furry cheeks bear the remnants of past meals. “Sloths aren’t known for their grooming abilities, so she lives with it,” Jones said. When Bosco is hungry, he comes down and quivers his lip at keepers. Chalupa is the alpha of the two, though maybe Bosco’s just more polite and thinks of others first. If they both decide to meander down for a meal, the older gentleman will wait for his lady friend to finish before he comes down. And if he’s there first, he’ll move for her. She also gets first pick of the two comfy-looking hammocks. And speaking of that fur, in their native habitat — rainforests in Central and South America — it helps get water off them. Tiny ridges in the hair help hold onto algae, so sloths will turn green and blend into the environment. Just how sleepy is a sloth? So sleepy that it’s what they do at least 18 hours a day. Sloths are nocturnal, so they mostly move around at night. Much of that movement is devoted to finding their favorite foods tucked away in bowls placed in the trees. Curious keepers set up game cameras to see what their little buddies were up to at night when they were alone, but the animals moved so slowly, the cameras didn’t pick up their activity. Sexing a sloth is dicey. It’s incredibly difficult to tell if a sloth is male or female, as their sex organs are internal. Nobody at the zoo knows if Bean is a boy or a girl. They mostly say “he” to allay confusion, but technically Bean is unsexed. Keepers thought Chalupa was a male until they noticed her acting a little differently, did an X-ray and saw the skeleton of baby Bean. So how do they breed? Very mysteriously and very quickly. Female sloths in the rainforest will scream when they’re ready to breed, an effective way of getting their message across for creatures who spend all their time alone. Boy sloths come running, or, perhaps lollygagging, their way over. “Whoever gets there first wins,” Jones said. “It’s a race of sloths.” Feed me, Seymour! Sloths, whose closest relatives are armadillos, are herbivores and also technically folivores — animals who eat the leaves and shoots of trees. Once they’ve made their way to a training session, keepers need to constantly pay attention to them or feed them, or they’ll peace out. “You think of sloths as slow creatures, but when you’re training with them, it feels like they’re impatient,” Jones said. “They take so long to get down here you’d think they’d take a minute to hang out.”