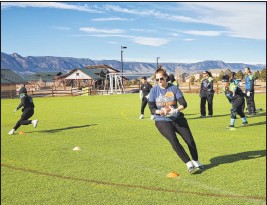 When coach Damareo Pruitt invite friends and family to his football games, they always seem skeptical. Why? Because the players are women, competing in a male-dominated sport. But after a few minutes of watching the action on the field, the new spectators become believers and see that gender shouldn’t hold anyone back from putting on pads, helmets and cleats before tackling someone to the ground. “The biggest difference is society’s perception of it,” Pruitt said. “They do all the plays the men’s teams do.” He’s in his sixth season with the Colorado Springs-based Rocky Mountain Thunderkatz, a semi-professional team. It’s part of the Women’s Football Alliance, a national organization made up of about 60 teams. In 2017, the Thunderkatz were the Pacific Region Champions and made it to the second round of the playoffs — their highest achievement to date. This season, they once again are looking to win the national title. Linebacker Sarah McClernan still remembers that achievement. “That was amazing to hit that level of almost making to the national championship,” said McClernan, who is also the organization’s vice president. The women do not get paid. They play for the joy and excitement and to defy stereotypes. Admittedly, the players said, it took them a while to learn the rules, in addition to the offensive and defensive schemes of their playbook. But it didn’t take long for them to get hooked to the sport. The Thunderkatz have been around since 2011. They welcome anyone who’s interested to try. In fact, go to their Facebook page on a desktop computer and a chat box will pop asking, “I’ve never played football, can I still try out?” “We are committed to providing a first-class experience for our women and young athletes,” the organization says on its Facebook page. “The Thunderkatz continue to advance the cause of women’s athletics by providing female athletes an opportunity to play football. We are dedicated to producing an outstanding football organization in the city of Colorado Springs.” Though tryouts have ended for this season, which starts in January, the Thunderkatz welcome anyone to come watch them play. They have six regular season games before the playoffs. They, of course, hope their season ends with a trip to Canton, Ohio, the site of the national championship game. Alissa Edmondson decided to give football a try. The Air Academy High School graduate played various sports growing up, including hockey and volleyball. Football, she says, is a new concept to her, but she’s pumped to put on a Thunderkatz uniform. So far, she’s enjoyed the camaraderie the most. “As an adult making friends and doing things, it’s harder,” said Edmondson, 26. “And now to be on a huge team full of women who share at least one thing in common with you, as you get to know them, there’s a lot more things and I think that’s my favorite part.”